POSTPONED
Performances of The Bill of Rights portion of The Constitution, A Secular Oratorio by Benjamin Yarmolinsky, are being planned at the ACLU and around town with our original cast.

MIDNIGHT IN THE GARDEN

Midnight in the Garden is a staged program of song repertoire showcasing soprano Francesca Mondanaro, recognized for her “electric…high impact singing” (Opera News), “riveting performances” (Washington Post), and ability to create “thrilling and shattering music-drama” (Parterre Box). Midnight in the Garden features cycles by Respighi (Deità Silvane), Alban Berg (Seven Early Songs), and songs by Rachmaninoff, Tosti and others, evoking a dark night of the soul on an unknown and winding path from dusk to dawn.

New Operatic Works in Progress
Behind the Door
TBA

WOMEN OF SALT AND LONGING

A meditation on exile, displacement, and longing for home
TBA

A Secular Oratorio
by Benjamin Yarmolinsky

“Benjamin Yarmolinsky’s choral work is literally a setting of the articles of the Constitution of the United States and the Bill of Rights, all the more important in today’s troubled age.” —Superconductor

Shining a light on the foundational document of the United States, Vertical Player Repertory presents a semi-staged performance of The Constitution by Benjamin Yarmolinsky, a setting for chorus and soloists of significant portions of the United States Constitution, including highlights of Articles 1-7, the Bill of Rights, and subsequent amendments.

PRESS FOR THE CONSTITUTION

‘The Constitution,’ ‘Figaro 90210!’ Headline Top 5 Operas to See This Weekend: “During these complex political times, it is especially unique to see a work that puts the Constitution front and center. This is an opportunity for audiences to familiarize themselves with a document that represents the soul of the U.S.” —Operawire

“The VPR chorus brought bucketloads of character to Yarmolinsky’s extended choral passages; the result was less a homogenous chorus, and more a rich tapestry of individual personalities coming together in a sharp, full-throated ensemble. Their performance had an infectious energy, which, under the baton of Peter Szep, was channeled into a nuanced and vibrant interpretation of the composer’s score.

“In a directorial coup, the doors to the theater, bordering onto the street, were left open throughout, so that the entire performance took place in full view of Brooklyn’s gawking flâneurs. At times, the performers spilled out onto the sidewalk, their gentle chorale mingling with the sounds of passing traffic and restaurant punters, as if hinting at the vast American nation beyond.”—Parterre

We The People image by Karni Dorell

A BAROQUE HOUSE CONCERT BEHIND THE DOOR

Due to illness, we are postponing Opera Feroce: The Beast Returns.
But The Beast will return someday!
And there will still be music Behind the Door on Thursday evening.
Kelly Savage, Opera Feroce’s San Francisco-based harpsichordist, is here on a rare visit to NYC and has decided to seize the day and coordinate an informal evening of chamber music. And so, we offer an informal house concert featuring works by Handel, Porpora, Morel, Hasse, Buxtehude and others.
A Baroque House Concert Behind the DoorHayden DeWitt & Judith Barnes, mezzo sopranos
Joseph Trent, traverso flute
Vita Wallace, baroque violin
Motomi Igarashi, viola da gamba
Kelly Savage, harpsichord

available at feroce.brownpapertickets.com
or at the door, reservations please, at vpropera@gmail.com

If you already purchased tickets to Opera Feroce: The Beast Returns, please get in touch at vpropera@gmail.com. Thanks so much for your support!

And just who is “The Beast”?
Come hear some of Feroce’s fiercest hits, and maybe you will find out…

POSTPONED due to illness
Behind the Door

“Wonderfully small,” “magically twisted,” “funny, touching, and thoroughly entertaining,” the celebrated opera troupe in miniature Opera Feroce returns to its home away from home, Behind the Door, for an evening of greatest (and lesser) hits. With an ever-evolving cast of characters including Mll. Zirconie, Sig. Topazio, and Herr Smaragd Von Schmuckstück, Opera Feroce is sure to delight, amuse, and have you lifting an eyebrow (or two) at their light-hearted antics and gorgeous music-making.

Don’t miss this rare Brooklyn appearance before the Ferocistas head off to various and sundry international locations!

BUCKY AND HIS FRIENDS

Bucky’s back in Brooklyn! So Brooklyn can heave a sigh of relief knowing it’s still got personality. Come for the songs and jokes, and stay for the frolics, flubs and blunders…and of course the gorgeous gals and mystery guests.

AFTER THE CHILDREN’S HOUR

A vocal recital interweaving trios, duets, and art songs that touch upon the inner voices of childhood and the intensity of young love, with a nod to the mothers who got us all here.

From the musical proportions of the Soul of the World (Amina Mundi), to the cosmic disorder caused by Love and the senses, The Cosmos Shimmers reflects on the eternal harmonies of body and soul, both universal and all-too-human. With readings paraphrased from Plato’s Timaeus.

“PROMISE ME,” Spain and Latin America in Song
Zarzuela, Opera, and Art Song from Argentina, Cuba, Spain, and Mexico

Pablo Zinger, dubbed “The King of Zarzuela” by Opera News, will be joined by two vibrant young opera singers, soprano María Brea and mezzo soprano Linda Collazo, for a celebration of the depth and passion of Spanish and Latin American vocal music.

Fresh from engagements at Deutsche Oper Berlin and The Metropolitan Opera, two thrilling singers return to VPR, to help raise funds for our 2019 season!

Dramatic soprano Francesca Mondanaro’s “unforgettable – voluminous, lush and beautiful voice”
and “electric, high-impact singing” joins forces with the “massive, sinfully rich” voice and
“stunning, dramatic delivery” of mezzo-soprano Karolina Pilou in a program of some of the
most demanding masterpieces of the repertoire.

WOMEN OF SALT AND LONGING

a meditation on displacement, exile, and longing for home

three monodramas for the female voice

A dramatic cantata for mezzo-soprano

IF WOMEN WILL NOT BE INCLINED

MILTON RESNICK at 100: A Centenary View 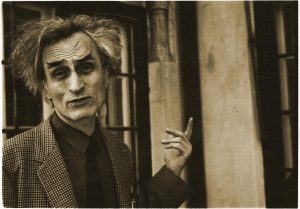 A remembrance and a showing of a new film, “Milton Resnick Paints a Picture.”

Disorder but completeness, a total anarchy and at the same time a universal truth.  — MR

“Milton Resnick Paints a Picture,” a short film of him painting and discussing his views on art and society, followed by a projection of paintings painted over eight decades.

Songs for voice and not piano

Opera Feroce and VPR team up for Jewels of the Baroque, the latest episode in the Incontro Barocco series.

An uptight baroque band and an unruly troupe of singers are hired to entertain at the home of a wealthy family with pretensions to nobility. A nod to the salon concert, Jewels of the Baroque is a gleefully assembled smorgasbord of instrumental and vocal works trespassing across genres, styles and national boundaries. Singers and instrumentalists alike are costumed in High Baroque style, and the audience is shown more than a glimpse of the rivalry, revelry, and repartee among the players.

VPR performs excerpts from
THE DWARF by Yoav Gal

An evening of treasures plucked from the dusty attic of Italian opera and polished to their former luster. The program will feature rarities by Verdi’s rivals Alessandro Nini, Giovanni Pacini and Federico Ricci, as well as early comic arias by Saverio Mercadante and Gaetano Donizetti. Some of these arias will be receiving their first public performance since the 19th century.

A reading of a new play by Lucille Lichtblau

A mysterious diary found at an estate sale gives a young, mixed race couple a troubling legacy to consider; that of founding father Thomas Jefferson and his slave Sally Hemings, who bore him six children.

ALBUM FOR THE NOT-SO-YOUNG

Bucky and his Friends

Written and performed by Isidore Elias

An evening of comedy and music with Bucky and His Friends, featuring Bucky Malocchio and his adorable Buckettes, with a guest appearance by Bucky’s rootin-tootin cousin Billy-Bob Hannity.

An evening with Rainer Maria Rilke

A comic opera by Yoav Gal

An open reading of the libretto of VPR’s first commissioned opera, THE PEACE, by composer Nizan Leibovich and librettist Isidore Elias.

A sumptuously costumed evening of music
with Opera Feroce and friends